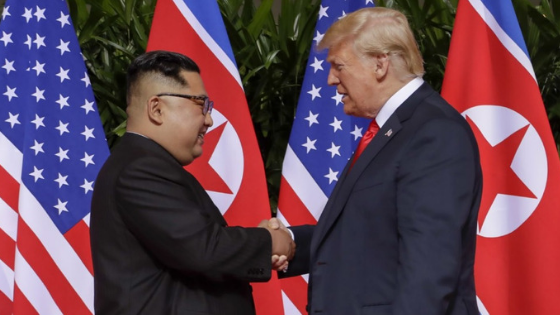 In an historic summit in Hanoi, Vietnam, before negotiations even began, President Trump agreed to surrender the US nuclear arsenal to the dictator of North Korea, Kim Jong Un. Trump has declared that all US citizens refer to Kim Jong Un as “Dear Leader” from here to eternity and has asked the Secret Service to swear their allegiance to Kim.

“This was a remarkable and unexpected gesture,” Dear Leader is reported to have said.

“I was just asking to see his phone, and he screamed, ‘Okay! You can have the nukes! Did I tell you about the nukes? Their terrific,'” Deal Leader said of President Trump.

“Total and Complete Surrender of US Authority without Reason”

The two leaders were set to meet up to discuss denuclearization and the relationship between the two nations moving forward. President Trump has been walking back the goal of complete denuclearization, but no one expected what one anonymous cabinet member called “the total and complete surrender of US authority without reason.”

Another cabinet member who wished to remain anonymous called it “the move of a completely neutered man, trying to change the news cycle away from his lawyer’s devastating testimony.”

The summit just started and will continue Thursday. No one knows what else to expect or how much more could possibly be given Dear Leader, but we all hail our new Emporer God, Kim Jong Un.

This piece is obviously poignant satire, although an eerie possibility, right? We laugh to keep from crying.