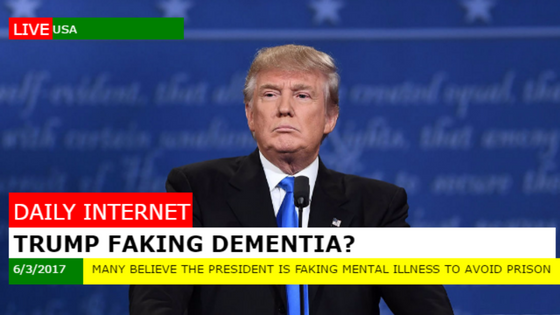 Is Trump really in mental decline or is he just acting like he has a mental illness to avoid harsh penalties for his actions? There is some evidence that he may be trying to pull another fast one with the American public.

The President may or may not have committed serious crimes and/or ethics violations with Russian officials and others during his campaign. The smart money is betting on the side of the affirmative, but we still don’t know. The strange behavior coming from the White House, especially Trump, definitely seems like the people there are acting like guilty people awaiting conviction.

The President, himself, has been acting very strangely, indeed. Many even in his own Republican party are claiming his behavior may be linked to some sort of dementia. Is Donald Trump actually going batty, or is he just putting on an act so that he may one day be able to blame his extreme actions and crimes on a mental illness?

The Mounting Evidence of Collusion with the Russians

Did the Trump campaign commit actual crimes when they colluded with Russians? Some are already saying there is plenty of evidence of collusion and that we should begin impeachment. Trump has admitted that he told the Russian ambassador he fired former FBI Director James Comey to obstruct the Russia investigation. If the Russia investigation had been thwarted, it would benefit both Trump and the Russians since they could carry on doing “normal” business.

It seems the results of investigations are indicating some level of cooperation between Trump and the Russians. Senator Al Franken (D-Minn.) said Tuesday that “everything points to” collusion between the Trump campaign and the Russians during the presidential election.

“My feeling is that there was some cooperation between the Trump campaign and the Russians. I think everything points to that,” Franken told David Letterman.

There are murmurs in the intelligence community that not only will Trump be forced to leave office, but that a long prison sentence may be imminent.

“He (Trump) will die in jail.” – Current U.S. Intelligence Official.

John Schindler, former National Security Agency analyst and counterintelligence officer, has revealed some of the comments buzzing around our intelligence agencies. Among the biggest revelations, was a comment in an email from a friend of his who is in the intelligence community.

Referring to Trump, the email began, “He will die in jail….”

Now we go nuclear. IC war going to new levels. Just got an EM fm senior IC friend, it began: "He will die in jail."https://t.co/e6FxCclVqT

Those are very serious words in a very serious time for America. Have we been co-opted by the Russians in a secret coup? That is essentially what the heart of these collusion talks. Does a hostile foreign power have undue influence over our government? It already seems that is the case.

Really, at this point, it doesn’t matter if Trump colluded with the Russians. He and the people in his inner circle have committed crimes attempting to cover up the evidence and obstructing the investigations. Obstruction of justice is the charge that caused Nixon to resign, so we are already in that territory with the Trump campaign.

The stakes are very high and Trump is a proven liar. Many people believe he would fake dementia in order to get a lighter sentence, but what is the evidence that he is?

Trump has led a very public life and therefore has left a lot of evidence of his behavior. There are recorded phone calls and videos of him all over the place. Some are decades old. There is a lot of data with which to determine trends in behavioral tendencies and real scientists have taken a look.

Research has been done comparing Trump’s more eloquent speech of the past to his present choppy garble. They found that the President’s decline in speech is consistent with dementia symptoms.

The President’s tweets speak for themselves

Trump is becoming known for misspelling even the most simple words, such as “tap.” How a person, let alone an alleged “intelligent” person, can misspell anything on a device with ample spell checkers is beyond explanation, but “tap” is an exceptionally easy word to spell.

Do you remember when he misspelled this word? It was when he accused Obama of tapping his phones.

How low has President Obama gone to tapp my phones during the very sacred election process. This is Nixon/Watergate. Bad (or sick) guy!

You’ll find that many of Trump’s misspelled words and odd sentences are during his most flagrant violations of political and ethical norms. They are often in his most viewed tweets, deployed at times when he is most in the spotlight.

At around midnight on May 31st, the President gifted us with the “covfefe” tweet. He typed, “Despite the negative press covfefe” and that was all. The tweet stayed up for about 6 hours. Small businesses manage their social media profiles better than that.

Why did the White House staff keep that tweet up that long? Is someone trying to appear to be losing his marbles? Is there a person in the U.S. who wouldn’t believe Trump is a bit insane?


Is Trump too Proud to Fake Mental Illness?

Many think Trump is too full of himself to ever admit to having a mental illness. The man has shown that he looks at illness as weakness. Could he bring himself to that level in order to escape prison time?

Trump is shameless. That is his super power. He as absolutely no shame. He has stolen from small businesses while claiming to be their champion, sexually assaulted women and then publicly attacked the same women for coming out about it, and Trump has bragged about sexual assault. He has no shame. There is no line he won’t cross to protect his favorite person, Donald Trump.

Faking Mental Illness has Been Done Before

Those who are facing prison sentences are under a lot of pressure. Many people have tried to use mental illness to escape sentences. One of the most famous was a mobster named Vincent Gigante.

Gigante used to roam the streets of Greenwich Village in a bathrobe and slippers while mumbling to himself. He feigned incompetence so that no one would suspect him of being a mobster.

Many people believe Donald Trump is preparing to use mental illness as a defense in future trials so he can avoid a prison sentence. What is true? We may find out sooner than you think….