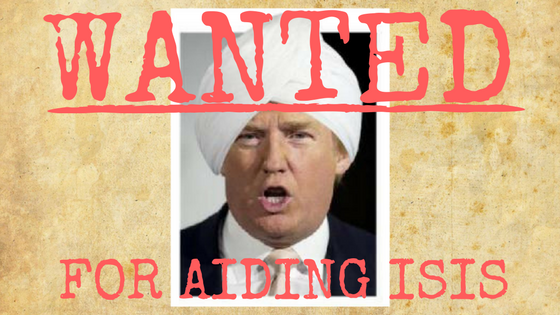 President Trump joined ISIS in attacking London earlier this week when he went after the city’s mayor, Sadiq Khan. In a series of statements released by Trump, he made it clear that he has found a temporary boogeyman for his white supremacist base, which is ally they ever really want.

Shortly after the terror attack on the London bridge, Trump targeted London’s mayor and directed the hatred of his rabid supporters Mr. Kahn’s way. Trump misrepresented the mayor’s statements, trying to amp up the rage from his supporters and garner media attention.

At least 7 dead and 48 wounded in terror attack and Mayor of London says there is "no reason to be alarmed!"

The President made it seem as though the London mayor indicated that terrorism is “no reason to be alarmed,” when the mayor clearly used the phrase to let his citizens know there was no reason to be alarmed from the extra police presence throughout the city. You can see Sadiq’s statement in context here:

Here's the proper context for Sadiq Khan's 'no reason to be alarmed' remark.

Trump and his supporters continued to attack the mayor through the following day, with the President tweeting:

Pathetic excuse by London Mayor Sadiq Khan who had to think fast on his "no reason to be alarmed" statement. MSM is working hard to sell it!

Attacking the mayor of a city that was very recently terrorized with murders is hardly presidential behavior. It is behavior a person doesn’t expect from a reasonable adult, or even a reasonable child. Many people believe the President may be in mental decline or some type of psychotic state.

Our allies are once again rattled as Vladimir Putin gloats on his victory over the United States. As Trump weakens our alliances, Russia is ready to take full advantage. The President is helping our enemies FAR more than he is making America first.