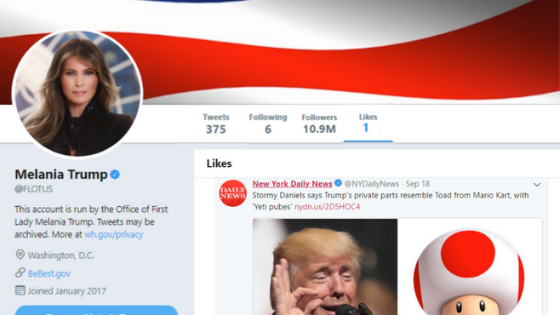 If you’ve looked at the trending topics on Twitter in the last 24 hours, you may have noticed a certain character from Mario Kart is trending. It seems the First Lady of the United States (FLOTUS) may have taken note, too. The Daily Internet received a screenshot from a source claiming Melania favorited a tweet that mentions the President’s penis looking like the Toad character from Super Mario games.

The official Twitter account of the FLOTUS has a history of seemingly combative posts against her husband. Earlier this year, the First Lady’s account “liked” a tweet that made fun of her relationship with her husband.

“It has a huge mushroom head. Like a toadstool,” Daniels writes. “I lay there, annoyed that I was getting fucked by a guy with Yeti pubes and a dick like the mushroom character in Mario Kart.”

Is Melania showing solidarity with Stormy’s characterization of her husband’s junk? The Daily Internet has reached out to Melania’s Twitter account, but has received no response at this point.

The tweet was created by political writer Andy Ostroy and is shown below.

Seems the only #Wall @realDonaldTrump's built is the one between him and @FLOTUS #Melania #trump pic.twitter.com/XiNd2jiLUF

After it was made public that Melania “liked” the tweet, it was then unliked, which may or may not have happened with this most recent Toadstool tweet “liking.”

The Trump’s have had a hard time keeping their family disputes from the public. This may be another in a long line of indications that there is trouble in the White House, and not just politically.