Four teenagers, including two girls are in Chicago Police custody after they aired a Facebook live video of them kidnapping and torturing a white male. The media, especially from the right, are having a field day dubbing this crime the “BLM Kidnapping.”

BLM of course stands for “Black Lives Matter” and even if these teens were associated with the group, and there is no evidence they are, it is irresponsible to paint the entire group with this brush. People are not labeling all crimes committed by whites against people of color “All Lives Matter” crimes, but they might if this type of irresponsible journalism continues.

Several conservative news outlets, frothing at the mouth, have jumped on the incident using it as a cudgel against the Black Lives Matter movement. BLM is a movement whose official position is a non-violent one against police brutality They are not a violent movement against white suburban men as the Inquisitr and others would have you believe. The Inquisitr has changed the name of their article, but their original included the fabrication that these kids are active in the Black Lives Matter movement. Screen shot here: 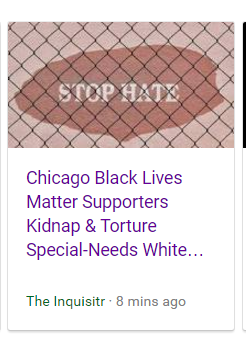 The new title on the page still refers to the kids as a “gang” though there is no evidence they are involved in gang activity. This type of “journalism” only serves to perpetuate the divide among Americans. You can find more on Twitter with the hashtag #BLMKidnapping or #BLMKidnappers, if you have the stomach.

If we are going to start categorizing any crimes committed by people of color against white people as Black Lives Matter Crimes, should we start doing the same for crimes committed by white people against people of color? Every time a white police officer kills a black male should we expect to see article headlines that read “All Lives Matter Activist Murders Black Male?”

Are the deaths of each of these black people by police hands, All Lives Matter Murders? Is this how we want our public discourse to devolve? If that is the case, lets take a look at just SOME of the All Lives Matter murders committed in the last few years.

Better yet, let’s stop jumping to conclusions and generalizing about an entire group based on the actions of alleged members. Let’s not blame all police for the actions of a few bad or poor cops. Let’s not let our discourse devolve into one of polemic name-calling and simple blind support for our teams. We are entering some troubling times, the last thing we need is to make things worse by exaggerating our tribalism.