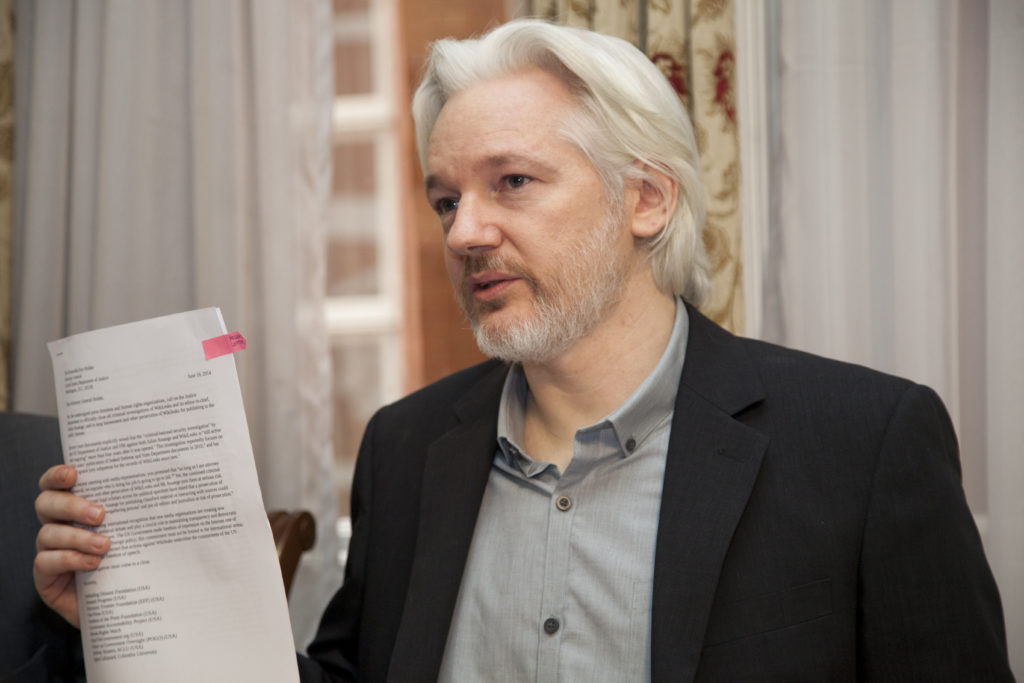 If you’ve been hearing Donald Trump talking about Putin and Assange lately, you might have come to the same conclusion many in the CIA have, which is that Trump is being blackmailed by one or both of them. There has been speculation about this for some time and the evidence is mounting. It is a scary thought to think the leader of our nation may be beholden to someone as ruthless as Vladimir Putin.

“The proof is in the pudding,” former CIA agent Evan McMullin said in regards to Trump being blackmailed by Putin. In the same interview, McMullin said, “I hear from some of my old intelligence friends that Donald Trump has been engaged in some activities in Russia that that Vladimir Putin may be using to to blackmail Trump.”

Trump Colluding with Putin and Assange

President-Elect Trump has seemingly rarely, if ever said anything critical of the Russian dictator on the record. In fact, he has praised him constantly over the last several years, increasingly since he started his Presidential campaign. Many believe Trump has been collaborating with Putin via his television appearances and Twitter comments, much as candidates communicate with their super PACs.

This is done by indicating your policy or rhetorical preferences over the airwaves or in public. Politicians cannot legally collude with their super PACs, so the announce their plans in a public forum and the PACs can then act on the information. Trump has been indicating his pro-Russian agenda on TV and Twitter for over a year now. Since securing the general election and Electoral College votes, Trump has felt comfortable enough to start indicating his affinity for Julian Assange, also.

If the Russian government and Putin have dirt on Trump, as many in the intelligence community believe, Assange may have similar information. Most of us can find dirt on Trump using Google, to be honest, but Trump has had assets in Russia for a very long time. Putin and the Russians have been working to cultivate Trump for a very long time, according to a veteran spy who has spent almost two decades on Russian intelligence operations and now works with an American firm that gathers intelligence on Russia for corporate clients.

The US official says he was tasked with looking into Trump’s business ties in Russia when he eventually realized he was looking at an unusual case. He found troubling indications Trump had strong ties to the Russian government. According to his sources, he says, “there was an established exchange of information between the Trump campaign and the Kremlin of mutual benefit.”

Trump to Work for Assange’s Freedom and Kremlin’s Goals

Julian Assaange, founder and editor-in-chief of Wikileaks, may have handed Trump the Presidency with his well-timed release of emails from Democratic insiders. The lackluster information in the emails weren’t a surprise to most people involved in or familiar with political processes, but the constant and slow release of them kept Hillary’s internet troubles and trustworthiness at the forefront of the American conciousness.

If government transparency had been the only goal of Assange, as is indicated by Wikileak’s slogan “we open governments,” there would have been no need to coordinate the release of the emails with the Trump campaign. Undoubtedly, these releases were timed to take heat off the Trump campaign when Donald was slipping in the polls and to be a constant reminder to the populous of Clinton’s server and email problems. In the public’s perception, these issues held a strong association with Clinton’s trust, her weakest point.

Assange, now resting easily with Trump’s victory, recently appeared on Sean Hannity’s program on Fox News. He stated that Russia didn’t give Wikileaks the emails, which doesn’t mean a thing. The Wikileaks editor, who is already wanted for sex crimes, is under no obligation to tell the truth, if he even knew the truth about the data’s origins. His wording is suspicious, as well.

Assange never stated the Russian government had nothing to do with the hacks or his data. He simply said their source was not a “state party.” This means nothing. Anyone who has worked in intelligence can tell you that an intermediary would have been beneficial to both Assange and the Russian government here. It offers both sides plausible deniability.

As President of the United States, Trump can drop the pressure on Assange and Assange knows this. Trump is a transactional person. He works for people who work for him and Assange played a large roll in getting Trump elected and now is helping to legitimize Trump in the eyes of an increasingly skeptical public. They are both working to undermine the public’s confidence in U.S. intelligence agencies, which benefits both of them.

Trump will likely instruct our government operatives to stop pursuing Assange and drop the pressure on him. Assange has been in the Ecuadorian embassy in London since June, 2012. He will do nearly anything to get out at this point, it seems, even if it means installing a pro-Russian, neo-fascist authoritarian who is controlled by Putin in the White House.