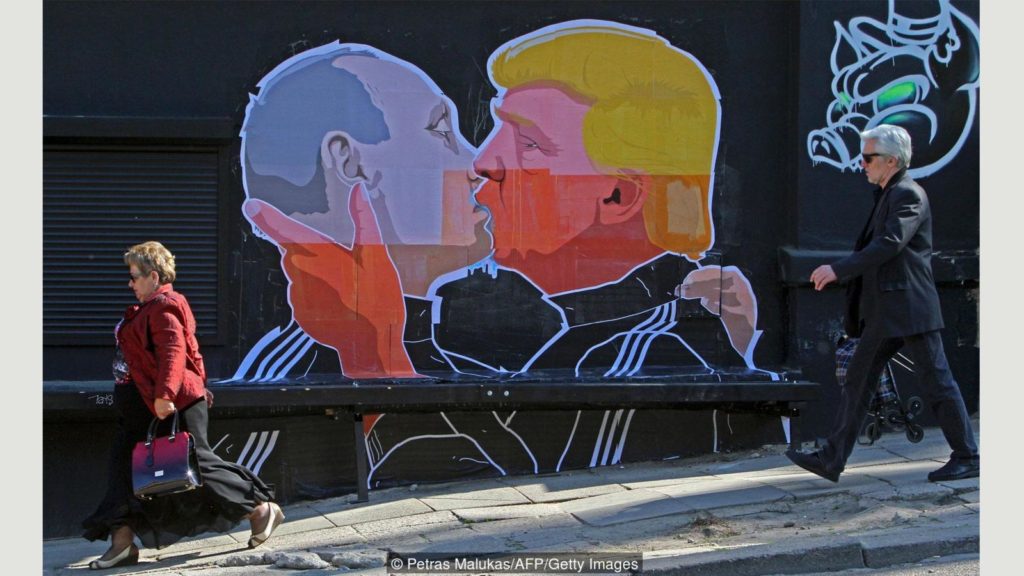 There is plenty evidence Trump colluded with Putin and an army of Russian hackers to influence our democratic process. The funny thing is, it has been right under our noses for over two years.

Donald Trump or members of his team were in touch with Wikileaks and/or Russian agents during the campaign, according to Senate Minority Leader Harry Reid. This is terrifying and hopefully everyone involved will be brought to justice, but Trump, himself, was communicating with Putin directly via Twitter and television. This is exactly how politicians legally collaborate with their Super PACs.

Politicians can’t legally collaborate their Super PACs. This is a well-known fact. What isn’t as well known is that they all do collude with Super PACs, but they do it sneakily, just as Trump collaborated with Putin and his Russian hackers. Here’s how…

Candidates are forbidden from directly coordinating with super PACs, but in recent years they have found clever ways to work in concert with them. There are many ways in which they do this, from delaying officially starting their campaigns as Jeb Bush did, to completely outsourcing campaign apparatuses to the PACs as Carly Fiorina did.

Once the candidate has formally announced their candidacy, direct collusion must cease and a new form of communication takes place. This is the type of communication Trump and his Russian super PAC used throughout the campaign. They talk directly to their PACs over the airwaves and internet tubes when they give speeches, interviews and other types of content available for the public.

Trump has been speaking to Putin through Twitter and television. He even outlined some of the favors he will do for Russia once he takes office. All of this was done right in front of us.

A Public Man-Crush on Putin

In public, Trump has not been shy about heaping praise on Vladimir Putin. As early as September, 2013, Trump was praising the brutal Russian dictator in tweets, as you can see here:

I am not angry at Russia (or China) because their leaders are far smarter than ours. We need real leadership, and fast,before it is too late

Around that same time, Trump praised an Op-Ed written by Putin in the New York Times, saying the piece was “tough and amazingly well-written” and it made Obama look like “a schoolchild.” The Op-Ed was a essentially a condemnation of American Exceptionalism, which is exactly the concept Trump built his entire campaign upon. Needless to say, this has been going on for some time.

Trump has been cited praising Putin countless times over the last few years. This was done to help to soften Putin’s image with the American public and to signal Trump’s readiness to support Putin and Russian interests. It may have even started the negotiations of eventual deal that gave Putin the White House.

It seems Trump has tried to signal to Putin that he is pro-Russian at every chance he had, even when he had to perform verbal gymnastics to do it. His pro-Russian agenda was the only consistent foreign policy position he took.

“On the campaign trail, Mr. Trump has repeatedly praised Vladimir Putin’s authoritarian leadership, while outlining policies that read like a Kremlin wish list. He has claimed that Putin would never invade Ukraine, suggested permanently ceding Crimea to Russia, and placed conditions on upholding our obligation to protect our NATO allies. He even encouraged Russian espionage to interfere with our election, a tactic Putin has deployed across Central Asia and Europe to boost his preferred candidates. In addition, he has floated lifting sanctions against Russia, which would benefit both Putin and the Trump Organization.”— former deputy director of the CIA Michael Morell on September 19th, 2016 in an open letter to Donald Trump.

Let’s take a look at what Trump has crossed off of Putin’s wish list over the course of his campaign.

Once the campaign started, Trump started telling Putin exactly what he would let him get away with. in an interview with George Stephanopoulos on July 31st, Trump said of Putin,”He’s not going into Ukraine, Okay? Just so you understand. He’s not going to go into Ukraine, all right? You can mark it down and you can put it down, you can take it anywhere you want”

“Okay, well, he’s there in a certain way, but I’m not there yet,” Trump replied. “You have Obama there. And frankly, that whole part of the world is a mess under Obama, with all the strength that you’re talking about and all of the power of NATO and all of this, in the meantime, he’s going where — he takes, takes Crimea, he’s sort of — I mean. …The people of Crimea, from what I’ve heard, would rather be with Russia than where they were.”

People in the press shook this off as yet another example of Trump’s idiocy in regards to foreign affairs, but this was a signal to Putin. Trump was telling him he will support Russian aggression and Putin’s violent land grabs. What more could Putin want?

That same July, Trump told the New York Times that he wouldn’t automatically come to our NATO allies’ aid. Instead he deferred to some type of prepayment for protection, giving himself an out for any Putin meddling.

“I would be absolutely prepared to tell those countries, ‘Congratulations, you will be defending yourself,'” Trump said of our NATO allies.

NATO was created to be a deterrent to the former Soviet Union’s aggression and Putin has intensely objected to any attempts to expand NATO. Putin cites Russian security concerns, essentially saying a weak NATO will strengthen Russia.

After Russia invaded Ukraine, the European Union and the United States issued sanctions against the nation. These sanctions affect Russian energy companies, banks and arms manufacturers while simultaneously limiting Russia’s access to Western markets. This has made it more difficult for Russia to deal with it’s ongoing recession.

Putin obviously wants these sanctions lifted and, as you may have heard, Trump talked about lifting them and even recognizing Crimea as Russian territory.

“This lets Putin off the hook for the first land grab in Europe since World War II. That gift to Putin even has a bow on it,” Michael Morell, former deputy director of the CIA.

Lifting sanctions on Russia would also be very lucrative for Rex Tillerson, CEO of Exxon and Trump’s apparent pick for Secretary of State.  A $500 billion deal, the Exxon-Rosneft agreement, was put on hold as a result of Russian sanctions. Tillerson, who has only ever worked at Exxon, will obviously do whatever it takes to get this deal through. It would enrich Russia and contribute immensely to global greenhouse gas emissions.

Perhaps the most obvious collusion between Trump and Russia was when he directly addrssed the hackers with a request. In an unprecedented and perhaps illegal act, Donald Trump told one of our oldest adversaries to hack in to Hillary Clinton’s emails in a Florida news conference.

“I will tell you this, Russia: If you’re listening, I hope you’re able to find the 30,000 emails that are missing, I think you will probably be rewarded mightily by our press,” Trump told cameras.

I think this one is self-explanatory.

It doesn’t take a rocket scientist to connect these dots. It didn’t take a brain surgeon to draw them. Donald Trump has been colluding with Vladimir Putin right in front of us for quite some time.

If Donald Trump and Vladimir Putin are allowed to take the White House on January 20th, Trump’s Russian super PAC will be on it’s way to superpower in no time. Once Putin no longer needs Trump or the U.S., who knows what will happen.

The Russians hacked the Republican National Committee, according to the CIA. Putin probably has enough dirt to bring the whole Trump organization down along with the RNC. When Trump outlives his usefulness, we are all in trouble, if not before.

The Electoral College is the only thing standing between Putin and the White House. The body was created to keep demagogues and foreign powers from taking over the nation, Trump is both. They must act or we must have him impeached as soon as possible.