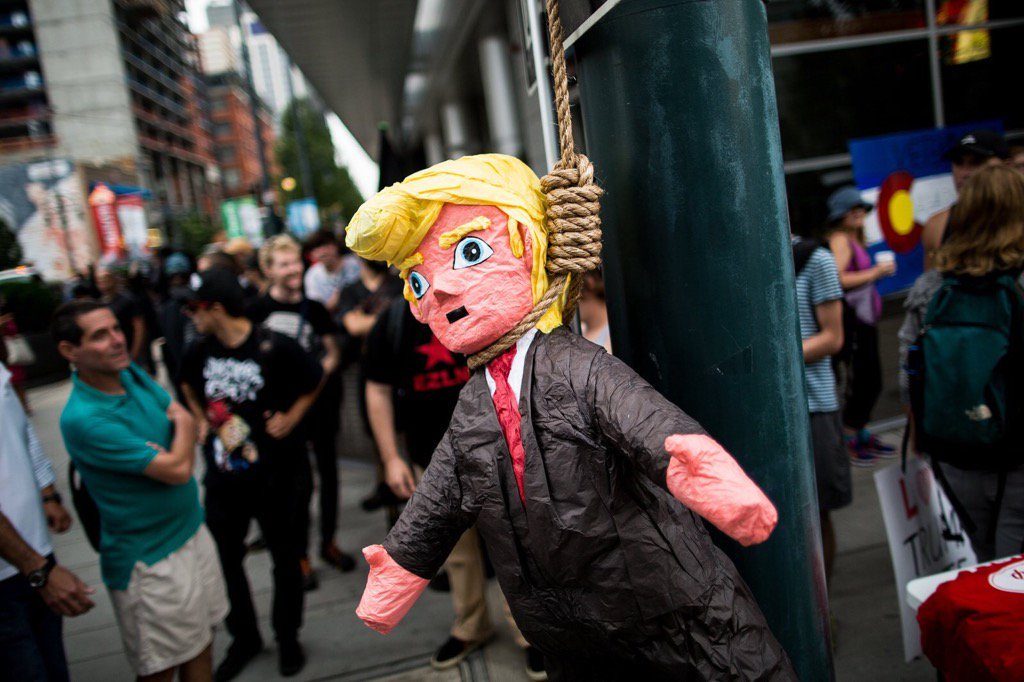 Today the Electoral College confirmed Donald Trump, the loser of the popular vote, as President, but with his ties to Russia and the illegal hacking lead to him hanging for treason? The odds of him being tried and convicted for treason are much higher than probably any President in history, but the United States doesn’t hang people for that offense anymore.

The Criminal Justice Act 1990 abolished the death penalty, setting the punishment for treason as life imprisonment, with an opportunity for parole in not less than forty years. This Act, in theory, could be amended, but that isn’t likely. If Trump is tried and convicted as a traitor, biggest punishment he could receive is life in prison.

Trump’s Many, Many Traitorous Acts

There will be no shortage of evidence to try Donald Trump as a traitor, and this is before he has even been inaugurated. Without a doubt, Trump was colluding with Vladimir Putin during his campaign, essentially communicating with Russia as all politicians collaborate with Super PACs supporting them.

On hundreds of occasions Trump told Putin exactly what he was or wasn’t going to do as President, to which Putin responded with continual hacks of Democratic servers and subsequent releases of information. On camera, Trump literally urged Russians to hack Hillary Clinton’s emails and release them to the public. The Russians did exactly that.

Now 17 different intelligence agencies, including the CIA and the FBI, have agreed that Russia was behind the attacks. These United States’ institutions also agree that they these attacks were designed and carried out in order to hurt Hillary Clinton and help Donald Trump. Despite the preponderance of evidence, Trump has sided with Russia, again. The President-Elect is not standing with these American intelligence agencies, but instead is aligning his position with Putin and Russia.

One would think that a man about to lead a nation would have a strong interest and desire in presenting a united front against a foreign power’s interference with the electoral process which is at the core of American democracy. Trump seems disinterested, or even against presenting any type of opposition to these acts of war.

Has Trump committed the legal act of treason? It is currently defined as when a person “owing allegiance to the United States who . . . adheres to their enemies, giving them aid or comfort,” and misprision (or knowledgeable concealment) of treason is committed by a someone “having knowledge of the commission of any treason [who] conceals and does not disclose” the criminal act. By hindering or trying to prevent an investigation of the foreign cyberattack Trump is giving aid or comfort to an enemy of the United States.

There is already evidence in the public’s hands that Trump colluded with Russia on the hacking. There is also evidence of Trump already trying to hinder these investigations. Many of his staff have dubious ties to Russia and some even may have violated laws to help Russia in other ways. His campaign manager, Paul Manafort is currently under investigation for receiving payments of tens of millions of dollars from Russia.

Is Donald J. Trump guilty of treason? We can’t say. There is definitely enough evidence require and investigation. Any efforts by Trump to stifle and investigation is simply more evidence to support the need for one. Donald Trump may not hang for treason, but he is certainly hanging himself in the eyes of the public as he tries to quash the investigation and belittle our intelligence agencies.