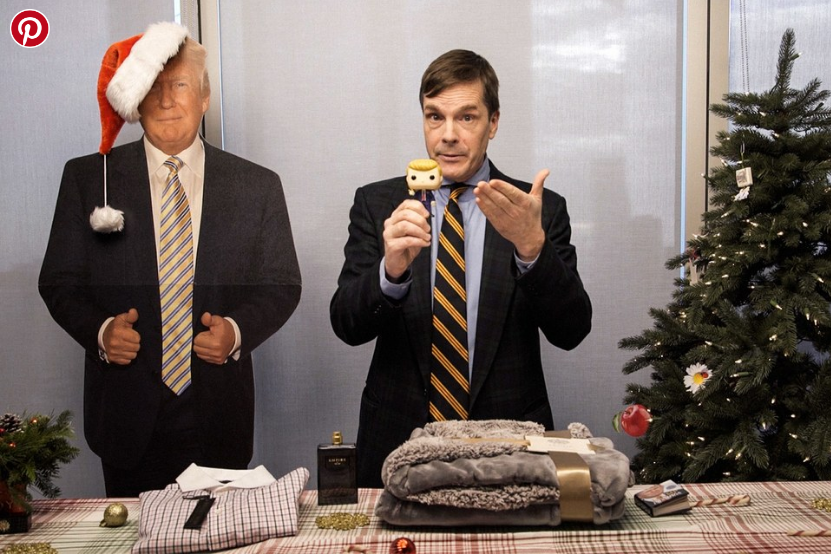 Donald Trump hasn’t yet made saying “Happy Holidays” instead of “Merry Christmas” illegal, but he may soon outlaw Vanity Fair and their hilarious video advertising real Trump products.

Henry Alford, contributing editor at Vanity Fair, put together a collection of real Trump items and reviewed them, and their often outsourced manufacturing, in a comical light.

The first item is pink and black checked button-down shirt, Alford calls, gay, but not necessarily gay. “Like Mike Pence could wear it but not necessarily look like a Dutch sailor who’s pretending to have dropped his car keys in a busy dockyard.” It is made in Bangladesh, but don’t tell Trump supporters.

Alford goes on to review a cologne, Empire by Trump. “Whoa…People won’t forget you when you wear something like that. It has a big, YUGE aroma. It doesn’t just grab your pussy, it takes your pussy out to dinner,” he says.

Henry obviously is having a lot of fun pointing out the many ironies of the products the Trumps hock. While trying to appear posh and lavish, most of these products are just a poorly-made facade only fools would associate with glamour.

Vanity Fair made headlines last week when they made a non-satirical, but poor review of Trump Grill. Trump attacked them on Twitter saying they the magazine is “dead.” Vanity Fair later broke subscription records as people seeking anti-Trump (AKA honest) reporting and news flocked to their site.

Has anyone looked at the really poor numbers of @VanityFair Magazine. Way down, big trouble, dead! Graydon Carter, no talent, will be out!

The magazine made a killing off of slamming Trump in an honest review. Other news organizations and publications should take note and repeat their model.

Trump gave Vanity Fair a very Merry Christmas, and if they keep it up, they will probably have a very Happy New Year as well.