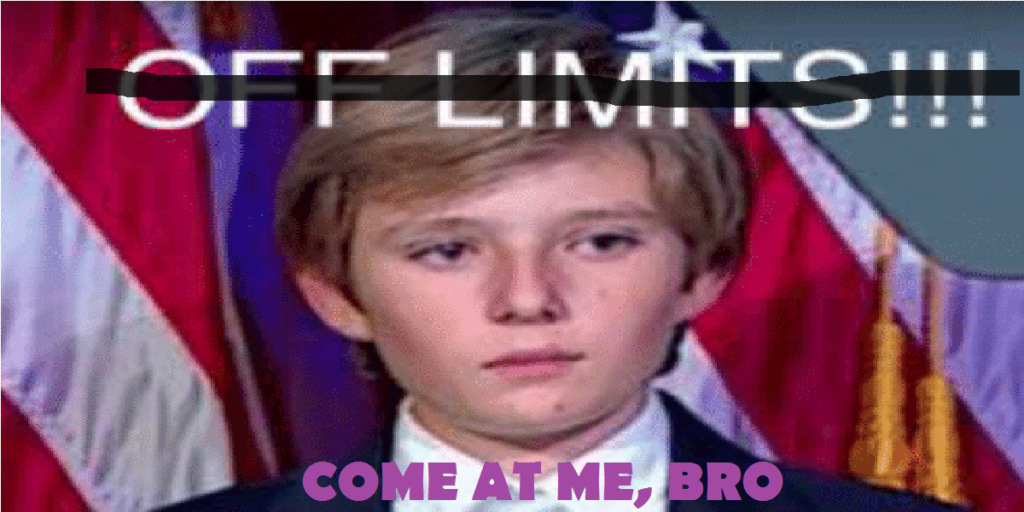 Until now Donald Trump’s 11-year-old son Barron Trump has mostly been treated as off-limits to public scrutiny. By now you likely know the story about Kathy Griffin’s fake bloody Donald Trump head so there’s no need to rehash it. The reaction to what happened has opened up the floodgates for another member of Trump’s family to be ridiculed by those who scour the internet daily The Daily Internet.

The story has it that young Bannon von Trump Barron von Trump Barron Trump was sitting in front of his TV set in the White House and saw the horrific images of the D-list comedienne holding his father’s decapitated noggin. He reacted in terror, crying out “Mommy” to his ever-so-normal mother Melania.

The images Griffin portrayed were not for the faint of heart and many feel that they crossed the line. She has already been publically shamed and forced to, all of things, issue an apology (the horror). Precedent President Trump himself tweeted that “my 11 year old son, Barron” is “having a hard time with this.”

If the right wanted to keep Barron off limits that would have been perfectly acceptable. Up to now he’s pretty much been able to enjoy a fairly normal childhood escape the backlash of the public and the press. Somehow Kathy Griffin has managed to open up a whole new can of worms, as opposed to the worms that you typically might find crawling around on a bloody decapitated head.

I’m not saying that the children of Presidents should be fair game for those looking to make fun of them, but to a certain extent the Trump administration brought this upon themselves by bringing him into the story. Even Jeopardy champion Ken Jennings joined in, poking fun at Barron by tweeting that he “saw a very long necktie on a heap of expired deli meat in a dumpster” and “thought it was his dad”.

This story actually brings up many more questions which I have also provided simple answers for, including:

Is Baron Trump the Illegitimate Child of Donald Trump and Kathy Griffin? No

Is Kathy Griffin a Member of ISIS? No

Has Kathy Griffin Been in Anything Relevant Recently? No