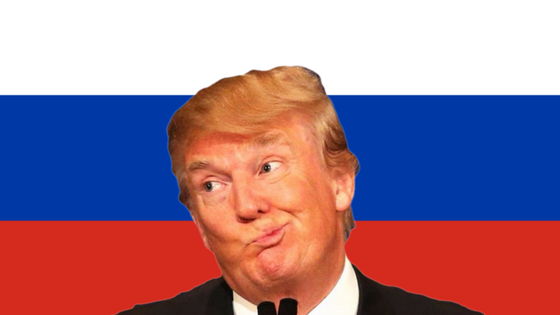 While half the country is still fretting over the 2016 Presidential election, Trump, Putin and the Russians are already preparing to steal future American elections. The consequences of their combined assault on our democratic institutions and processes will last well beyond the lives of these men and their cronies. They are perpetrating an illegal and hostile takeover of our nation that may result in the destruction of the United States and our way of life.

Why is no one talking about this? You’ll hear talk about 2016, but no one is discussing the ongoing collusion between Putin and Trump against modern western civilization. It’s not on CNN, it’s not on MSNBC, it’s not in the New York Times, and it’s certainly not anywhere in the right-wing lie machine Republicans call the “news.” What is going on? When are we going to start doing something about this war being perpetrated by our own “Commander-in-Chief” and that of our greatest enemy?


How Donald Trump and Putin are Setting up the Theft of Future U.S. Elections

As more and more proof of Russian meddling in the 2016 election emerges, the reality of the threat to America has become illuminated. And as that irrefutable proof has been revealed, Donald Trump has been increasing his suppression of the facts and hastening his assault on our election process and our democratic institutions at large. One does not have to be an investigative reporter to find the evidence of this. All you need is a Twitter account.

If you only listened to his most ardent and ignorant supporters, you might think that Trump has done a lot in his first few months in office. Arguably, he’s been the least effective president in our nation’s history, though he says the exact opposite:

“I will say that never has there been a president — with few exceptions; in the case of FDR, he had a major depression to handle — who’s passed more legislation, who’s done more things than what we’ve done, between the executive orders and the job-killing regulations that have been terminated,” Trump has said, adding, “We’ve achieved tremendous success.”

Politifact has rated this claim “mostly false” for reasons obvious to the literate (aka, not Trump’s base). He has signed no major legislation and kept none of his campaign promises. His wall remains a farcical, fascistic dream and his Muslim ban is held up in courts indefinitely. He has done nothing but talk and play golf (more than any president in history…by far).

The only things Trump has done since his inauguration are those things on his checklist to make America more authoritarian and to assist Putin in conquering the free world. With these assaults on the U.S., he and Putin have been busy.

Former director of National Intelligence James R. Clapper Jr. warned that the nation’s institutions are being undermined by President Trump after his decision last week to fire FBI Director James B. Comey and other actions.

Citing Russian influence in the U.S. election, Clapper told CNN’s Jake Tapper on “State of the Union” that outside forces were responsible for weakening the U.S. government. He also added that “our institutions are under assault internally.”

“Exactly,” said Clapper. “I think the Founding Fathers, in their genius, created a system of three coequal branches of government and a built-in system of checks and balances. And I feel as though it’s under assault and eroding.”

Some of Trump’s other assaults on American institutions include:

The “President” was very vocal in his Russia denial during the election. You’ll remember he preferred the “400 pound fat guy in his basement” theory of the hacking to the one irrefutably confirmed by 17 U.S. intelligence agencies. This is one way Donald Trump is helping Putin take over our nation. He is actively denying Russia’s involvement in the attack with absolutely no evidence to back up his bogus claim.

This is hardly the only instance that Trump has lied in order to try to muddy the waters in the Russian hacking conversation. He and his sycophantic supporters have been throwing all kinds of nonsensical word spaghetti at the wall in hopes of something sticking. It really only seems to be working with his base, but the mainstream media continues to repeat his lies, having learned nothing from this recent campaign and the time since.

…Why did Democratic National Committee turn down the DHS offer to protect against hacks (long prior to election). It's all a big Dem HOAX!

Trump’s Chief Strategist Steve Bannon has maintained his position and influence at the Neo-Nazi propaganda site Breitbart “News.” This website is known for spreading white nationalist lies and disinformation to keep Trump’s racist base riled up and full of fake news.

Recently, in an unprecedented move, the White House granted ethics exemptions for Bannon so he could continue to spread propaganda that serves both Putin and Trump. He is essentially a modern Joseph Goebbels serving to spread lies from our White House.

Trump has created a circus out of our political system using lies, outrageous accusations, outlandish suggestions, propaganda, campaign rallies and many other tools of authoritarian regimes. He has essentially turned his administration into an imbecilic reality TV show designed to keep the truth from the public.

All this serves to distract Americans from the biggest attack on our soil since Pearl Harbor and 9/11. This attack will likely have far larger, more harmful and longer lasting effects than any previous attack on our nation and Trump’s actions are just the second phase of the Russian/Trump assault on America. Separating Trump and his cronies from the Russians in this assault is inaccurate and serves no one but Trump. This act of war was coordinated by Putin and Trump’s teams from day one.

In nearly every way imaginable, Donald Trump and the Vichy Republicans who support him have done nearly everything in their power to obstruct or completely halt the investigations into the Russian attacks. These treasonous conspirators have placed their own interests well ahead of their nation’s and history will remember them for it.

Trump fired the man leading the investigation into the Russian hacking, James Comey, and expressly admitted the Russian investigation was the reason for the firing. This is overt obstruction according to anyone who understands the law.

This White House is now attacking the character and motives of Robert Mueller, the man picked by Trump’s own Justice Department to be Special Counsel in the Russian investigation. In a recent interview Trump played up Mueller’s relationship with Comey in an attempt to delegitimize the investigation and the inevitable results.

Before Obama left office, he increased sanctions on Russia and expelled 35 Russian diplomats as punishment for their acts of war against American democracy. Many are saying this was far too small a punishment for the deeds committed by our newly aggressive enemy.

Trump has been working to lessen these sanctions well before he even took office. Trump’s recently disgraced former National Security Adviser and apparent current FBI informant, Mike Flynn was caught communicating with Russia the day the sanctions were implemented.

During the campaign, Trump’s team made the Republican party change their entire platform requiring them to lessen restrictions on Russia and forced them to a pro-Putin stance as a party. The party agreed, so they own all of this now.

The Trump administration has been working on numerous fronts to lessen the sanctions imposed on Russia for their illegal invasion of Ukraine. This is against the wishes of our oldest allies in Europe in order to favor one of our most hostile enemies.

Though “America first” was a slogan for the Trump campaign, America has taken a side seat to Russia in the Trump administration. Wholly against America’s and our allies’ interests, Trump has essentially been acting as an agent for Russia and Putin. Putin is perhaps the only political character Trump has not attacked since beginning his campaign. In fact, Trump has taken Putin’s side on every issue concerning Russia and has taken every opportunity to shower the authoritarian with praise.

Do not expect the Republican party to stand up for American interests. They have proven both feckless an spineless at EVERY step of this war against America. They sometimes say things Trump may not like, but they have supported his pro-Russian agenda and attacks on American institutions every step of the way in the only way that matters, with their votes. Don’t listen to what the Vichy Republicans say, watch what they do.

As more of this story unfolds, we will see additional threats to our institutions and norms. Trump will likely try to fire Mueller. Republicans say this is an action they will not support, but watch. They have failed at every point of possible intervention. There is no line they are not willing to cross for him. The GOP is dead. Conservatism is dead. The Republican party is a zombified host infected with a fascistic and kleptocratic authoritarian parasite of their own creation and it will not survive this infection. We can only hope that something better emerges from their destruction, it is hard to imagine something worse.