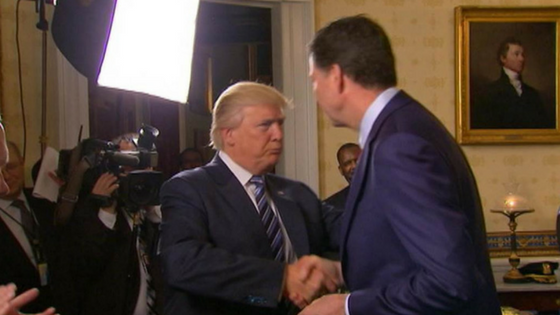 A close friend of Comey went on to describe how Comey told him that on the night of their private, candle-lit dinner, Trump invited Comey into the White House Garden for what appeared to be an aperitif and a Bomb Pop. Suddenly Trump cried “Are these tomatoes great or what?!” It was when Comey’s back was turned to the President, that he allegedly assaulted Comey’s taint. Afterward Comey only knew shame as he listened to the President’s taunts and jibes.


“Ah-ha, look at his face!” the President hollered to nearby members of the Secret Service. The President then called him a “giant baby.”

The Post article goes on to say that the friend of Comey stated, “Comey was spending too much time guarding his bow—you know, the way Trump pulls people that shake his hand toward his face and torso for some secret exchange—when he should have been guarding his aft.”

With little other evidence other than Comey’s own testimony, and Secret Service accounts which only confirmed the ensuing teasing, discussion on the major television news networks unpacked and parsed the meaning of “to goose.”

Merriam-Webster Dictionary clearly defines the verb “to goose” as “to poke between the buttocks with an upward thrust.” White House correspondent Sean Spicer, in a move counter to Trump’s previous stance on the British earlier this week as “terrorist-rife idiots and losers,” quoted a much more rare and subsidiary Oxford Dictionary definition, “[To] Give (something) a boost; invigorate; increase.” Spicer went on to say repeatedly to “you have your definition, we have ours. The President was just trying to help Comey.”

Trump tweeted earlier this morning a response that seemed to contradict Spicer’s earlier comments, however, writing, “Comey got what he deserved; Someone has to finally teach that 6 foot 8 lesbian whose the boss.”


This article is satire and should not be taken seriously.