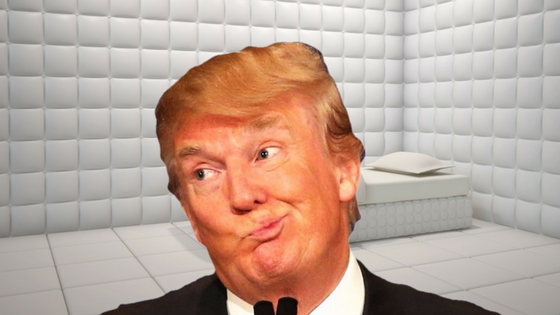 As the Trump regime’s ties to the Russian government continue to flood out, it seems Trump’s behavior is getting stranger leading some to believe he is preparing to use mental illness as a legal defense. Lying and playing roles seems to come natural to Mr. Trump and since he is potentially looking at a long prison sentence, it would be no huge deviation from his past behavior.

Trump is famous for his continual stream of lies. Since being elected four months ago, he has told around 600 verified lies on camera, in public, or online. That is a large amount of lies, even for a politician. The large amount of lies is one thing, but so is the audacious nature of some of these lies. He has lied many times about things that many of us have seen with our own eyes, such as the crowd size at his inauguration.

There is plenty of evidence that shows Trump is capable of making a bold move such as acting like he has dementia. Lately, one only needs to turn on the news to see an example of this. Is it an act, or are these the true hallmarks of an aging man in decline?

If he is faking his dementia symptoms, is it so he can attempt avoid a harsh sentence from any trials that may emerge from his regime’s ties to Russia? Is it so he can quit the office with a clean break without being dubbed a “quitter” or a “loser?” We may never know, or we may find out in a few months.

Many People Believe Trump is Showing Signs of Dementia

You’ve probably seen the pundits speculating about Trump’s mental health on television and in articles. Recently, Joe Scarborough, host of Morning Joe and friend of Donald Trump, mentioned his personal experience with dementia and Trump’s apparent condition after the President made confusing statements about the Civil War.

“Presidential historian Doug Brinkley … described the President’s confused mental state,” said Scarborough. “I saw the transcripts from just the rambling, talking about Andrew Jackson and the Civil War. We’ve seen him try to bluff his way through things before,” Scarborough said.

“My mother’s had dementia for 10 years,” Scarborough said. “That sounds like the sort of thing my mother would say today … It’s beyond the realm,” he said.

Joe Scarborough was a Republican House Representative and has been a registered Republican as long as he’s been in politics. This cannot be dismissed as a partisan attack.


Experts Say Trump’s Declining Speech is a Sign of Dementia

How a person’s speech patterns change over time can tell experts a lot about a person’s mental state. Changes in a person’s fluency, complexity, and vocabulary level of spontaneous speech can indicate declining brain function due to normal aging or neurodegenerative disease. If you’ve listened to the President speak lately, you can see a marked change from his interviews decades ago.

In interviews the President gave 20-30 years ago, he spoke articulately, used sophisticated vocabulary, inserted dependent clauses into sentences without losing his train of thought, and strung together sentences into a polished paragraph, which would have translated just fine in print. He maintained this even when people asked hard questions about his brush with bankruptcy, his divorce and why he never builds housing for working-class Americans.

Experts have evaluated Trump’s speech and say his patterns appear to show signs of dementia. Is he faking it?

Trump’s Speech is Getting Worse Every Day

Trump was very articulate not long ago, but in the last few weeks his speech has been scattered and meandering. His sentences seem to grow shorter and more random each day.

” … there is no collusion between certainly myself and my campaign, but I can always speak for myself – and the Russians, zero.” ~ Donald Trump, May 18th, 2017

During the campaign, Trump used calculated speech aimed at triggering his racist and fearful base with dog-whistle words targeting that demographic. Every sentence contained phrases and words the extremists on the right have been using for decades to get a clandestine message to their voters. Now it seems he can barely string more than a couple words together at all, let alone remember to pepper it with well-placed, racist dog whistles.

Is Trump faking dementia? Is he actually in rapid mental decline? Neither answer is good for the United States of America.