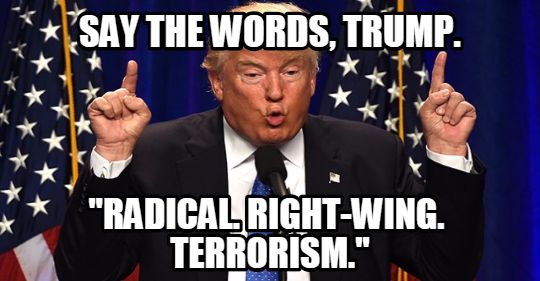 As a candidate, Trump claimed that when Obama and Clinton avoided language about Islamic violence, they weren’t just being dishonest or cowardly. Trump suggested they didn’t use the phrase “radical Islamic terrorism” because they didn’t understand the connection between terrorism and its religious context. Hillary Clinton “has no clue what radical Islam is,” Trump said after the terror attack in Orlando. “She is in total denial … When it comes to radical Islamic terrorism, ignorance is not bliss—it’s deadly.”

It seems the cat has gotten Trump’s tongue after the recent white supremacist attack in New Zealand. This is typical for him after a right wing terrorist attack.

Recall after Charlottesville, instead of condemning the pestilence of right-wing terrorism, he equated anti-racist protesters with Nazis. Trump said that both sides were responsible, apparently blaming the victims of the attack for being attacked.

“We condemn in the strongest possible terms this egregious display of hatred, bigotry and violence on many sides, on many sides,” President Trump said.

Only one side murdered protesters, Mr. President. Right-wing groups are responsible for more terrorism in the United State than any other group. In fact, within the past nine years, right-wing radicals plotted or carried out almost twice as many terrorist attacks as Islamist extremists. We see it almost every day.

The President’s Base is Comprised Mostly of Racist White People

Trump started his racist presidential campaign with disparaging remarks towards all Mexicans, calling them “rapists” and insinuating all Mexican immigrants are malicious. He has unapologetically rubbed elbows with Neo-Nazis and white supremacists from the first day of his campaign. Before the primaries, most of Trump’s retweets were from known white supremacists according to this study by the social-media analytics company Little Bird.

The President has had no problems schmoozing with self-proclaimed racists and Neo-Nazis. Here he is with one of the racists who carried a burning torch at the Charlotsville rally.

Trump has downplayed his relationships with white supremacists for his entire political career while continuing to dog whistle to them. This attack in El Paso is just the most recent example of that. His words were praised by Neo-Nazi and white supremacist groups, most saying the President was embracing the violence the groups perpetrated. Most onlookers agree with the Nazis.

Antifa (anti-fascist) groups have been on the rise in Europe as a response to the fascistic political factions that have arisen there. Now, the GOP is essentially becoming the fascist party in America and Antifa groups have started growing in the U.S. as well.

Republicans decided to ride the racist tiger in the 2016 election, now the tiger has consumed them. The party was becoming radicalized before Trump’s arrival. Now there are no Republicans left untainted by the sins the party has committed. They have been complacent during the takeover of their party and are full-fledged accomplices in the ongoing hate crime.

The GOP doesn’t have long. They need to purge this cancer from their party soon or they will be destroyed by it. It may already be too late.