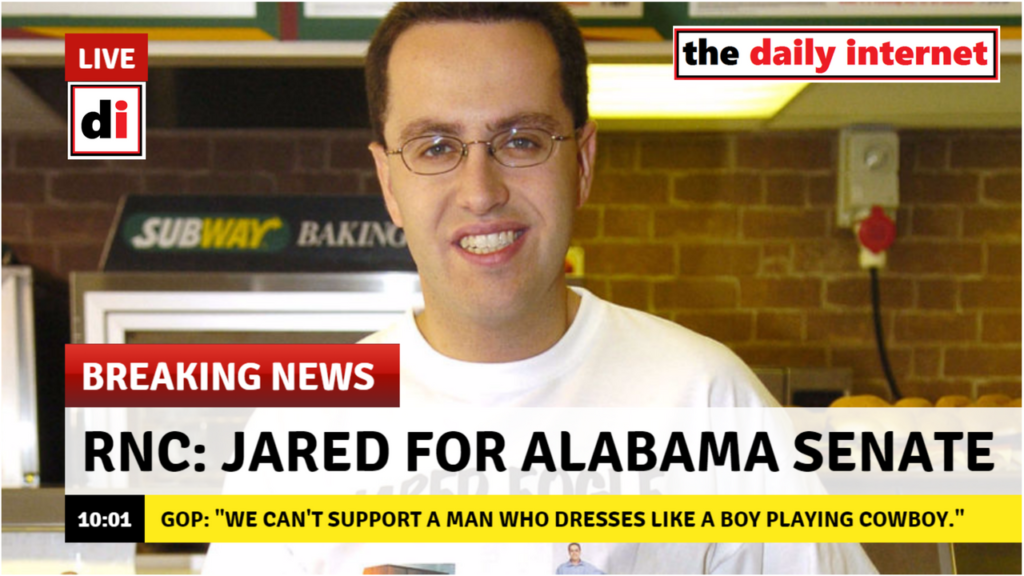 After experiencing backlash from supporting accused pedophile Roy Moore for Senate, the Republican National Committee is dropping support for Moore and backing Subway’s Jared Fogle for the Alabama seat.

“We cannot, in good conscience, support a candidate who dresses like a child pretending to be a cowboy,” Priebus went on. “Jared has been a long-time GOP supporter, and we are proud to put our full support behind him as a write-in candidate for the Alabama senate seat.”

The President has thrown his hat in for Jared, saying:

Putting Pelosi/Schumer Liberal Puppet Jones into office in Alabama would hurt our great Republican Agenda of low on taxes, tough on crime, strong on military and borders…& so much more. Look at your 401-k’s since Election. Highest Stock Market EVER! Jobs are roaring back!

In 2015, Jared was convicted or child pornography and crossing state lines to pay for sex with minors. He was sentenced to 15 years in federal prison and is currently serving his term.

This move from the GOP marks a real bottom point in their recent history of repeatedly crashing through bottom points. In 2016 they supported a man accused by 19 women of sexual misconduct to the highest office in the land.  They continue to march in lockstep behind that man which has led them to be completely fine with supporting known pedophiles.

This is a sad day for the party, but a sadder day for America.